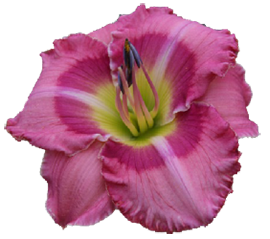 What make daylilies so special?

Daylilies, unlike expected, are not directly related to lilies of any sort. Their flowers, however, do bear a resemblence to that of many lily varieties.

"Hemerocallis", the botanical name for daylilies, means "beautiful for a day" in Greek, as an individual bloom only lasts one day. Yet there are many flowers formed on each scape (flower stem) throughout the blooming period of a daylily. Once established, a clump of daylilies will send up many such scapes.

Over 35000 varieties have been registered - at least a third of these are not on the market today. Why so many? Daylilies are easy to breed. After collecting a few varieties, many people start hybridizing there own. It is not uncommon for new introductions to cost $150 to $200 in the USA. It is however necessary to have them properly registered.

There are three categories of daylilies: evergreen, semi-evergreen and dormant. "Dormant" means deciduous- the foliage dies back to the ground each winter. "Evergreen" refers to those varieties that keep their foliage green until the heaviest freezes. "Semi-evergreen" foliage recedes partially (but not at all in warmest climates). Unfortunately, these categories are somewhat arbitrary and often inaccurate.

When you buy them, daylilies normally come in single or double fans. You can also dig up your own mature clump of daylilies and divide them in separate individual fans. When you plant them, allow the soil to cover the top of the roots by two cm and space them 25cm to 50cm apart, depending on size of the variety. After a month, scatter fertilizer around the plants. Keep well watered, as the quantity and quality of blooms are directly related to the moisture of the soil.

Daylilies love sunshine - the more the better, though they can tolerate up to half a day of shade.

Daylilies are not fussy about soil. They grow well in almost any soil that is not consistently soggy or swampy. They seem to take sandy, heavy clay, alkaline or acid soils in stride, as long as they are amended with extra organic matter.

In our area daylilies bloom from early October till late March. The length of the bloom period varies greatly from one variety to another, so we often find that the flowering of an early variety overlaps that of a late variety. Some varieties are recurrent, meaning that they bloom more than once in a season.